It's lazy but because it overlaps so much I posted this running post through my other blog. It's about my attempt to train for a marathon entirely on the treadmill because it's too darn cold to run outside. Read about it here:  http://whyeveryoneshouldmovetonewzealand.blogspot.com/2017/06/running-at-south-pole-during-winter.html
Posted by Unknown at 1:51 PM No comments: 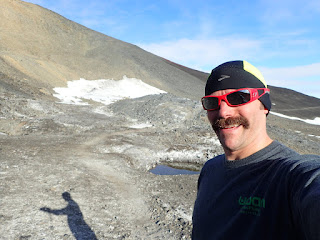 Well I'm finally 100 miles into my South Pole running. Only one of those runs was done outside which means, you guessed it, my running partner is a treadmill.


While I was able to get a few runs in en route to the South Pole while on the continent (see pictures), it is just too darn cold to run outside down here. The one run I went for outside at the Pole, after allowing some acclimation to the altitude, was followed by a sore knee for two weeks. I had been working hard and it was most likely just some overuse. A little rest and I was fine but by the time I wanted to run again the weather outside had certainly gone from maybe you can run in it to you might be crazy to try running in it. 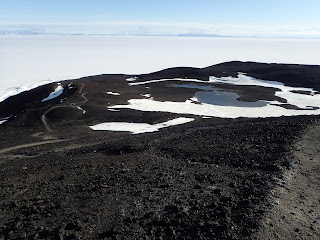 I have always hated treadmills. The few times I have had to use them in life it has always been begrudgingly. Now it is the only option and it has taken some getting used to for certain. It has been tough getting used to living at 9,000 to 11,000 feet (it changes based on the barometric pressure) and my running was definitely suffering from trying to make that transition, but mostly it has just been the treadmill.

Well, the only valid option I have found is to watch a TV show or a movie. It seems ludicrous as I have never listened to music while running, but a show or movie can take the mind off of the treadmill for between five seconds and at times up to five minutes! Everything about a treadmill just irks me but in a place where the average temp is currently -80 degrees F with a wind chill of around -124 degrees F, and it's only getting colder, there are not many valid options short of suicidal running outside. 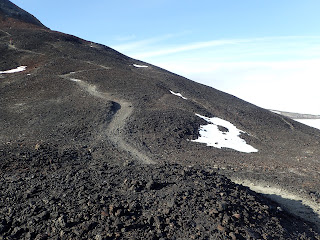 The Wire, season one, has become my good friend. Together we have finally began to cover some distance. I'm still working on getting my pace down but yesterday I ran past the 100 mile mark while the season came to a conclusion. Something about that moment, maybe the only thing in all of my treadmill running, felt right.

Well we have a walk/run/etc back to McMurdo challenge. Around about 836 miles from us is the station we all flew in from - McMurdo. As a fun way to stay fit, there is a giant piece of paper on the gym where people can chart their progress by the mile. Not only is it a fun way to compare yourself to your fellow co-workers for encouragement and such, but it also serves, like a running journal, as a constant reminder if you have not added any miles lately.


My personal goals for my time here are to make it to McMurdo and back (much like the original explorers would have had to do but in reverse), to run a marathon on the dang machine (so I can have this continent under my belt - and yes I'd rather do it outside but the timing is just not going to work out), and to hopefully keep in shape without injuring myself so I can do a few runs when back in New Zealand to see what the benefits of eight months of running above 10,000 feet feels like. I'm kind of excited about the last one but it requires the hardest challenge - no injuries. 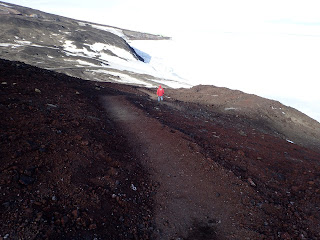 So there you have it. Running at the South Pole during the Winter kind of sucks. But there are three treadmills and the opportunity is really quite amazing. For now it is a daily struggle to get on the infernal machine but I bet by the time I leave it will have a nickname and I'll end up missing it.

Shout out to Bryan the Mizuno man for sending me down with some great shoes, as always. Thanks!

Posted by Unknown at 7:42 PM No comments:

It's Called a Crosswalk People

With so many political facebook posts dissolving lifelong friendships left and right, I figured we should stop and talk about something that really matters.

Yes, well crosswalks and pretty much pedestrians in general. After having run on the roads, mostly out of necessity for lack of any alternative, for over twenty-four years (ouch that hurts to think about) I have come to a few conclusions about what drivers think of runners. And that's all well and good, (not really but whatever) but what I'm talking about here is beyond the general jerk who slings objects (yes it happens) or slurs out of his car window for some reason. Let's go beyond the unexplainable portion of our population who for some reason grow angry and swerve their cars towards the runners on the road.

I would like to talk about the average every day citizen, who I tend to hope is a good person just trying to get to work. I imagine they are in a hurry with places to go. But what I've had a hard time getting my mind around is their lack of understanding of basic pedestrian laws or in general the absence of any empathy for their fellow human being just trying to get a run in amidst the confusion of their day.

Crosswalks. Back to crosswalks. This first started bothering me at a deeper level when I saw people waiting for long periods of time down in Midtown at the crosswalk at Memphis Pizza Cafe. It is a crosswalk in an already slower speed limit area pedestrian zone. Just walk! But rightly so the people of Memphis fear for their lives, knowing they cannot trust a driver to see the crosswalk let alone stop.

Today we ran through a crosswalk on Wolf River Blvd connecting to Neshoba park. It is a busy road and I get why people do not want to stop. But as it is a big road they can see a pedestrian, even a runner, coming across the road quite easily with plenty of time to slow down. They are required by law to stop but grow ridiculously angry if said pedestrian insinuates they should stop as they drive by without even thinking of slowing down. I know because today I did more than insinuate such.

Anyway, enough of my ranting about the lack of knowledge or even compassion of drivers on the road. This is nothing new or in anyway a surprise to anyone who has been on the road, whether in a car or not. Maybe we could be the example when driving cars and begin following the law when we see people at crosswalks.

Oh and in case anyone is confused my use of the term crosswalk has been in reference to those that are not at lights, etc. Pedestrians, including myself, are expected to wait for the signal change. Below is the TN law on crosswalks if you're interested. It's pretty clear if you ask me. I know, you did not.

The Best Way to Catch Up with Friends 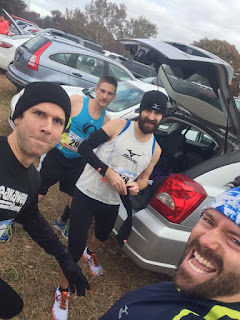 It is a strange thing to come back to Memphis as a guest instead of a person coming home.  Yet on such a short stay before we head to the South Pole it would be difficult to find people who qualify more as we do as visitors.

Coming back was not without the drastic shift in weather from Guam to Memphis. Such a cold blast to the lungs was quite intense indeed. Strangely enough I find myself missing the cold of last week. Having grown up in Ohio the cold weather is a thing a person has to learn to run in if there is any chance of a good track season. You learn to cope and then even to like it. At times I find myself missing some good frigid runs.  This past week offered a nice relief in this arena and I think I might get one or two more such runs soon.

The best part of coming back to Memphis, from a running standpoint, is getting to run with Bryan and Bryce. There have always been a plentitude of great running partners in Memphis and for that I will always be thankful. From a stellar cross-country team that welcomed us to Houston High School to continuous Breakaway runs over the years to long runs in training for marathon training.

During all of this time and mostly through convenience and other such factors, it was Bryan and Bryce who became the most consistent of running partners in Bluff City. Arguably the running partner is one of the most important factors in the running life. The conversations that have taken place while running with these two men have been one of the most memorable of all the pleasant gifts that have come from the many runs we have shared.

The feeling of running well known streets where so much of who I am as a runner has been formed has been both refreshing and sustaining to the body and mind. The area itself is so familiar and well traversed by my feet that something internal connects in a deep way with the roads, the smells, and even the feel of the city. It is wonderful to be back.


This Christmas I am quite appreciative of so very many things. In a season where I personally celebrate the birth of the Christ with a passionate excitement, I cannot help but share also how wonderful it is to have reliable and faithful running partners. It sounds strange to couple such ideas together but as I celebrate all the wonderful gifts of the season I do not wish to overlook one I am so grateful exists.

Other Blogs to Check Out 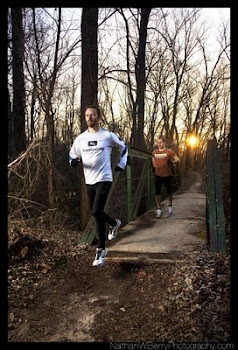 Brothes across the Bridge